1. Between the small fixed inductor and the color code inductor color ring inductor, as long as the inductance, the rated power is similar to the shape factor, it can be directly used instead.When replacing an inductor, first consider its performance parameters (such as inductance, rated current, quality factor, etc.) and the dimensions are in accordance with the requirements. The replacement methods for several commonly used inductors are as follows:

2. The oscillating line diagrams in semiconductor radios, although different in model, can be replaced by each other as long as their inductance, quality factor and frequency range are the same. For example: oscillating line Figure 1F-1-1 can be directly substituted with lTF-3 change.

3. The line oscillating coil in the TV should be selected with the same model and the same specification as possible, otherwise it will affect the working state of the circuit.

4. The deflection yoke is generally used with the picture tube and the line and field scanning circuit, but as long as its specifications and performance parameters are similar, even if the models are different, they can be replaced with each other. 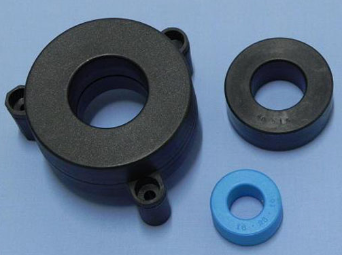 Open circuit is a common fault of the inductor, especially in the inductor coil wound with a thin multi-strand enameled wire. The cause of this fault is, in addition to the desoldering, it is probably due to the mold being weak after the coil is wet. The disconnection is often caused by moisture or mold, and most of the common faults occur at the solder joints at the beginning of the inductor or often broken.

Broken stock failure: Especially in the middle band inductance coil of the radio, because the middle band inductance is mostly made of thin multi-strand enameled wire, there are 7 shares, 9 shares, 14 shares, 28 shares, etc. The more the number, the higher the q value of the coil, and the multi-strand diagram can easily break off several of them. In particular, the wire-bonding and the lead-out soldering are more likely to break the strand. This kind of fault will find the inductance when measuring. The resistance value is increased compared to the original. If the broken strand occurs at the joint, it can be found by careful observation.